When one submits her or his spirit to God, a new creature is born.  The old has passed and the new has come…new life…new birth.  With this conversion, one’s priorities change.

For the life surrendered to the Spirit of God, there is no greater priority than obedience to God.  Obedience nurtures and matures faith.  It is the precursor to courage which enables one to fight, fight and fight.

Jesus is the perfect illustration of obedience.  Denying his privileges, pleasures, preferences and rights, He chose the Father’s will that He would offer Himself a full, perfect and sufficient sacrifice for our sins.  His journey in obedience would end in his enthronement as Lord of Lords and King of Kings, but before His coronation must come His crucifixion.

On the Cross, that altar of sacrifice, Jesus’ body and soul would journey to places he had never known.  He had seen death, but He had not experienced it.  He had seen abandoned people, but He had not known abandonment.  He had ministered to people who felt emptiness and whose souls thirsted for significance and hope, but He had not known this thirst.  Never before had He lived without feeling the refreshing flow of Holy Spirit.  But now, obediently bearing the sins of the world upon His own soul He is worn, wearied, troubled, fatigued and famished.  His parched soul utters the words, I thirst.

What thirst is this that brings such anguish to the Son of God?

What race is this that before crossing the finish line, the master of heaven and earth has suffered so much that He says, “I thirst.”  Thirst is a response to the need for what one cannot live without.  Just as our bodies cannot live without water, neither can our souls live without the Spirit of God.

In response to Christ’s words, “I thirst,” one of the soldiers , a man of this world of sin and oppression offered our Savior vinegar, perhaps to taunt and further Jesus’ suffering.  The world rewards godliness with persecution.  But, Jesus’ words were also a prayer that His Father in heaven heard and I believe He allowed Jesus to again feel the refreshing flow of His Holy Spirit.

Our Savior would not be overcome by thirst.  Nothing would separate Him from victory.

This site uses Akismet to reduce spam. Learn how your comment data is processed. 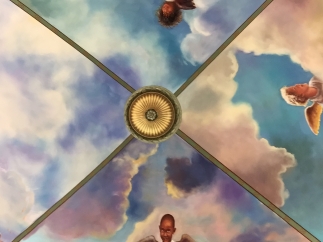