St. Mark African Methodist Episcopal Church is a historic African Methodist church in the Central Hillside Area in Duluth, Minnesota, United States. It was built in 1900 in a Gothic Revival style and was added to the National Register in 1991.

On March 21, 1921, W. E. B. DuBois spoke at St. Mark A.M.E. Church before a gathering of Duluth’s fledgling chapter of the National Association for the Advancement of Colored People (NAACP), which DuBois founded. The Duluth group, 69 members strong, had been established in September of 1920 in the wake of the June lynching of three innocent black men in downtown Duluth. DuBois in part spoke in support of Minnesota’s proposed anti-lynching law, which the legislature passed April 21, 1921. The Democratic-leaning Duluth Herald covered the talk, noting that the large audience contained “many of the white race.” The Herald reported that DuBois had said, in part, “If true democracy began at home, foreign nations would not criticize our attempts to carry it to the South Sea islands and other isolated parts of the globe…. The war had proved that the interests of all people are so intertwined that no people can live alone. Liberia is a failure because it is a state isolated from the rest of the world. It is in protest against the treatment received from superior groups that negroes and others segregate themselves in our great cities. Such ways of living are not in accordance with American ideals.” The Republican-leaning Duluth News Tribune did not make one mention of DuBois appearance in the Zenith City. Duluth’s W. H. Ray, who founded the NCAA in Duluth, presided over the event; his daughter Ethel gave an introductory talk. Ethel Ray (later Ethel Ray Nance) became friends with DuBois, and in 1945 began working for him as a secretary.

St. Mark African Methodist Episcopal (AME) Church has played a central role in Duluth’s African American community for over 125 years. While other black organizations have dissolved or moved to the Twin Cities, St. Mark’s has been a mainstay.

Rev. Alphonse Reff, who served St. Mark’s from 1973 to 1984, noted in a 1975 interview that the church’s reach extends beyond its walls. From housing fraternal groups in the 1910s to supporting the fledgling local NAACP to hosting vigils in the 2010s, St. Mark’s has remained a welcoming community space.

Duluth’s African American population at the turn of the twentieth century was small but active. Blacks established fraternal orders, political clubs, and newspapers in the port city, mirroring larger establishments in the Twin Cities. Churches were fundamental to the growth and connectivity of the community.

St. Mark AME Church was the first and only building in Duluth built by blacks, for blacks. Founded in 1890 by Rev. Richmond Taylor, the congregation first met at Fourth Street and Fourth Avenue West. Soon afterward, it moved to a newly constructed building at 530 North Fifth Avenue East. The structure’s basement level accommodated the congregation until 1913, when the main level was completed. The simple brick building sits in a mostly residential area. It features a two-story bell tower, Tudor Revival elements, and locally made stained glass windows.

Like many churches at the time, St. Mark in the early twentieth century offered the community a central space for religious, social, and political conversation and networking. The local Masonic order frequently held meetings at the church, and membership there and in local black organizations overlapped.

At the time of St. Mark’s construction, most African American men in Duluth worked as janitors, waiters, porters, or dock or boat workers. A few independent barbershops and restaurants succeeded. Other employment came to Duluth via the U.S. Steel Corporation.

St. Mark’s growth in its early years paralleled the growth of the African American population in Duluth, largely driven by job opportunities at U.S. Steel. In the early 1920s, the company recruited laborers—many from Southern states—to work at their plant in Morgan Park, a planned community near the edge of Duluth. Recruits found poor wages, unfamiliar weather, and discrimination upon arrival. Though their jobs were in Morgan Park, the company town, African American employees could not live there. It was a whites-only community. Most blacks settled in Gary, which was also a company town, or the East Hillside neighborhood, near St. Mark.

After World War I, Duluth’s blacks faced stricter segregation and harsher discrimination. When the lynching of three traveling black workers in Duluth captured national attention in 1920, St. Mark was proactive in response. Rev. William M. Majors of St. Mark assisted in efforts to indict the lynchers. The National Association for the Advancement of Colored People (NAACP) provided legal and financial support for the proceedings.

Before the lynching, African Americans in Duluth were not convinced a local NAACP chapter was necessary. After the incident, some outraged and fearful blacks left Duluth altogether. Those who remained formed an NAACP chapter with sixty-nine members, and St. Mark provided gathering space for the new organization.

NAACP founder W. E. B. Du Bois was the chapter’s first speaker. In March 1921, he came to St. Mark and spoke in favor of Minnesota’s pending anti-lynching law, which the state legislature passed the next month. Ethel Ray Nance, whose father helped establish the Duluth chapter and who became a civil rights leader in her own right, recalled in a 1974 interview that the church far exceeded its two-hundred-and-fifty-person capacity when Du Bois came. She estimated that 75 percent of the crowd was white.

Duluth’s black population grew to about nine hundred by 1970. In 2014, it remained just under two thousand, or 2 percent of the city’s total population. St. Mark continues to be central to the community and attuned to racial issues in the twenty-first century. St. Mark’s parishioners hosted a prayer vigil and bell-ringing for victims of the shooting at Emmanuel AME Church in Charleston, South Carolina, in June 2015. 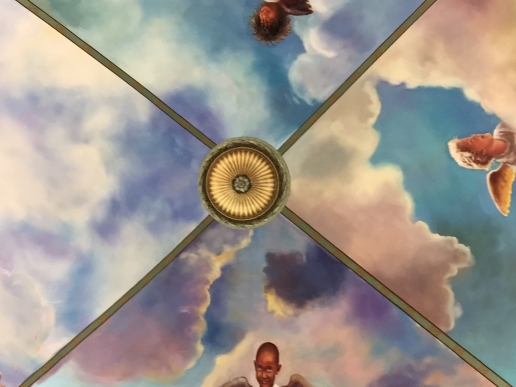